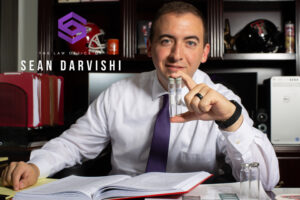 Sean Darvishi is a Trial Attorney in Houston, Texas who primarily handles DWI cases. Sean is originally from Columbus, Ohio but moved to Texas and attended Texas Tech for undergrad. He then attended Thurgood Marshall School of Law and graduated in 2014. Sean is married to his wife Melissa and they have 2 daughters, Quinn and Elise.

Sean is one of less than 150 lawyers in the nation who can call themselves an ACS-CHAL Forensic Lawyer Scientist which was conferred upon him after rigorous course work and testing at Axion Labs in Chicago, learning Gas Chromatography, Mass Spec. and more. Sean has received the TCDLA DWI Trial Warrior award as well as being named a Super Lawyers Rising Star for the last 4 years. Sean runs a trial heavy docket and has for multiple years been in the top 5 lawyers for Not Guilty verdicts in Harris County and has built a reputation of being a fierce competitor.

In his spare time, Sean enjoys spending time with his family and woodworking, building a variety of things from furniture to cutting boards.