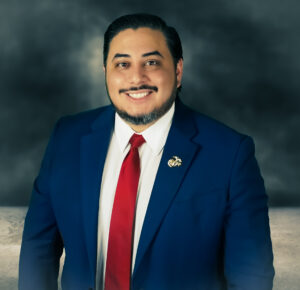 Rick Ramos Jr., is a founding partner of the Ramos & Torres Law Firm, PLLC. He currently dedicates his time to defending his clients in all criminal matters and representing those unfortunate enough to be involved in motor vehicle accidents.

Rick was born in Kentucky while his father was stationed there in the Army. He then grew up throughout the United States and for a few years in Panama. Ultimately, he ended up in Eagle Pass, TX where his family was originally from. Rick joined the United States Marine Corps where he deployed to Afghanistan in support of Operation Enduring Freedom. He then graduated with his Bachelors Degree from the University of Texas in San Antonio followed by his graduation with Honors from the Texas Southern University-Thurgood Marshall School of Law. While in law school, Rick was involved with the traveling Mock Trial Team and competed throughout the United States in Trial Advocacy Competitions, once winning Best Advocate.

After becoming licensed to practice law, Rick started his own practice, with his business partner, which remains going strong to this day. Rick continues to aggressively defend his clients and never stops seeking knowledge to gain an edge in his trial skills. He has now earned the ACS-CHAL Forensic Lawyer-Scientist Designation and is proud to use his knowledge and skills in the courtroom to continue to fight for his clients.