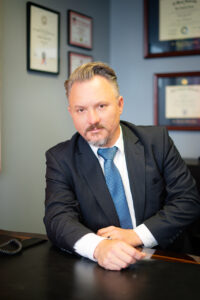 Attorney Douglas Huff is a Partner at Deandra Grant Law. He was born in Warren, Ohio and
was raised in Western Pennsylvania, outside of Pittsburgh, where he attended Mount
Pleasant Area High School. After high school, Attorney Huff enlisted in the United States
Army and served for four years receiving the Army Achievement Medal and the Army
Commendation Medal. He received an honorable discharge after completing his full term of
service and relocated to Austin, Texas.

After attending law school, Attorney Huff worked at Barbri, an organization specializing in
assisting law students in studying and passing the state bar examination. In addition to
being licensed to practice law in the state of Texas, he sat and passed the Oklahoma Bar
during this time. Afterwards, he opened his own law practice, The Law Office of Douglas E.
Huff in Dallas, Texas where he represented clients charged with various misdemeanor and
felony criminal offenses.

In 2013, Attorney Huff accepted a position with the Dallas County Public Defender’s Office
where he worked diligently as the lead attorney in many DWI trials and other
misdemeanors. Additionally, he has assisted numerous clients through plea negotiations,
led many evidentiary hearings, and prepared and took part in felony trials.
Attorney Huff joined Deandra Grant Law in 2016. He became a partner in 2021. Doug is
based in the Dallas office but practices throughout Texas.

On a personal note, Doug has one daughter who is an attorney in Dallas and a rescue dog
named “Athena”. He’s a military vet who loves to travel. One of his favorite trips was walking
the Camino de Santiago in Spain. Doug is also a competitive poker player you can often
find playing in tournaments around the country.