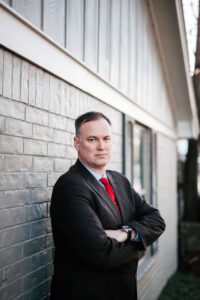 Craig Greening is a graduate of The University of Texas School of Law as well as Boston University, where he received a B.S. in Mechanical Engineering.

In 2010, Greening founded his own practice, now known locally as The Greening Law Group. Before starting his own practice, Greening began his legal career as in-house counsel and engineer in the semiconductor industry in Dallas, Texas. He then moved on to become a prosecutor in Brazos County, Texas, where he tried over 80 jury trials, ranging from Driving While Intoxicated to serious felony offenses.

Since his transition to criminal defense in 2004, Greening has tried and won countless cases, including several DWI breath and blood cases where the result was over 0.20, and the blood result was admitted into evidence. Additionally, Greening is one of the few lawyers who has received a not guilty verdict in Brazos County, Texas on a felony DWI. Greening has achieved many more dismissals, rejections, and not guilty verdicts on a wide variety of cases, ranging from DWI to Injury to a Child to Felony Murder, and even federal cases, including Drug Trafficking and Money Laundering. Throughout his career, Greening has handled numerous federal cases across the nation, including Texas, Louisiana, North Dakota, District of Columbia, and Seattle. He is widely recognized as an aggressive litigator and a fierce advocate for his clients.

In 2016, Greening completed the Forensic Chromatography, Solid Drug, and DUI-Drug courses at Axion Labs in Chicago, Illinois. Here, he received the ACS Forensic Lawyer-Scientist Designation as recognized by the Chemistry and the Law Division of the ACS.

Not only is Greening licensed to practice law in the state of Texas, but also in the Western, Eastern, and Southern Federal Districts of Texas, and the Fifth Circuit Court of Appeals. He is Board Certificated in Criminal Law by the Texas Board of Legal Specialization, has been selected as a Texas Super Lawyer every year since 2019, and has been selected as one of the National Trial Lawyers Top 100 Criminal Defense Lawyers every year to date since 2017. Craig Greening is the author of the Fifth Circuit Criminal Handbook, Lexis-Nexis, published originally in 2019 with new revisions each year.