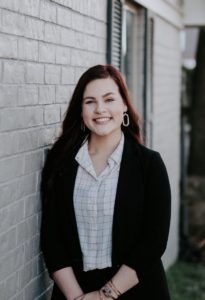 Cailey McLain was born and raised in Navasota, Texas. She received her undergraduate from Southwestern University in Georgetown, Texas and her law degree from South Texas College of Law in Houston, Texas. Cailey was licensed to practice law in November of 2018.

She began her career as a criminal defense attorney based out of Bryan, Texas, but practices in multiple counties across central Texas. The bulk of Cailey’s practice is focused on indigent defense, where she takes cases in several rural counties for individuals who cannot afford to hire their own attorney. Additionally, she has assisted on multiple high-profile state and federal cases.

In October of 2019, at the age of 26, Cailey became the youngest attorney in the nation to ever receive the “Lawyer-Scientist” designation by the American Chemical Society. She completed the Forensic Chromatography, Solid-Drug, and DUID courses all within the same year she was licensed.